March 7-9, 2003, the Women's Day March For Peace brings a close to the winter-long peace vigil by "Code Pink, a Woman's Vigil and Fast for Peace," which arrived in Lafayette Park on November 17, 2003. Members of the Peace Park Antinuclear Vigil were delighted to welcome these effective, focused folk, even though the Park Police began making some harsh rulings in wintry weather. See "Peace protests near White House growing," and "Where the Cold War Continues," and "Protesters say new group spurs crackdown."

March 15th is the "Emergency Antiwar Convergence on the White House."

* Daily drumming and prayer vigil 4-6:00 p.m. on the south sidewalk of (Lafayette) Peace Park, which began in earnest with the bombing of Afghanistan, October 7, 2001, to call for

. an end to the bombing;
. no depleted uranium use anywhere;
. provision of food and shelter for the refugees;
. stop the weaponization of space;
. de-alert nuclear weapons immediately.
For updates call Proposition One, 202-682-4282; Email: et@prop1.org

* Saturday, October 13, 2002 in solidarity with people around the world, drums were pounding outside the White House to Stop Star Wars - No Weapons In Space, as well as to pray for an end to the killing in Afghanistan.

Thanks to the 60+ people who joined us on June 3, 2001, to drum, feast, speak, and celebrate the 20th anniversary of this 24-hour-a-day presence. We had a big circle; people had come from as far away as Ecuador, Korea, Florida, Michigan, Baltimore, Fredricksburg. We missed (and appreciate the many messages from) others who were unable to join us. We're always ready for a Peace Park party, so if somebody wants to help get a weekly event going (music welcome), contact us. 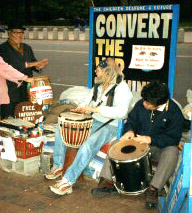 Thanks also to those who sent vigiler Ellen Thomas as a delegate to the World Conference Against A & H Bombs in Hiroshima and Nagasaki, Japan in August, 2001. Those who stayed in D.C. participated in the 20th annual Hiroshima and Nagasaki commemoration activities the week of August 5th to 9th. And a number of Japanese activists joined us in October to drum against the war.

* Congresswoman Eleanor Holmes Norton re-introduced the "Nuclear Disarmament and Economic Conversion Act" for the fifth time on July 16th as HR-2503, with a new clause calling for renewable energy. Please call her office (202-225-8050) to thank her, and to inquire how you can help promote the bill!

* Tell President Bush, the Congress and their Corporate Sponsors: STOP THE NEW ARMS RACE! Join us at the White House for a rally! Lafayette Park (just across the street) Washington, DC, Sunday, June 10, 2:00 PM - And in the halls of Congress Monday and Tuesday, June 11 and 12. For more information, contact: Project Abolition

* Some news for friends and fans of Elijah: once again, he's apparently run afoul of societial strictures.

* Nuts Not Nukes: Squirrels for Peace


October 12th: 12 noon, Indigenous Peoples' Solidarity Gathering in Lafayette Park with Global Peace Ambassador. Co-sponsored by Grey Panthers and the Piscataway Tribe. From the opportunity presented from the hand delivery of a letter to President Clinton about these events, it is this day that we are arranging for our spiritual leaders to meet with him.

* September, 2000 - Ongoing Fast for Justice and Peace in Vieques, Puerto Rico, which includes, Every Week Day, a Vigil in Front of the White House, 6:30-8:00pm. Washington Post.

* On September 22, there will be a "National Day of Solidarity with the People of Vieques" in Lafayette Park. For more information: www.viequeslibre.org and www.viequesvive.com. The 59th day of the Fast for Justice and Peace in Vieques, Puerto Rico, which included a Daily Vigil in Front of the White House, 6:30-8:00pm. Washington Post.

* September 26-28, Washington Gathering to Free Mordecai Vanunu, Israel's nuclear whistleblower, and for a Nuclear-Free World. September 26, Conference, 9-5 p.m., and evening program - 7:30 p.m. at St. Aloysius Church, 900 N. Capitol St. NW (at K St.), four blocks nortwest of Union Station red line Metro stop. Speakers include Bishop Thomas Gumbleton, Elizabeth McAlister, Rabbi Phillip Bentley, and Nick & Mary Eoloff, Vanunu's adoptive parents, from Minnesota. Evening program includes music by Ken Giles, lifetime-service award ceremony for Louise Franklin-Ramireaz, and talk by Daniel Ellsberg: "Mordechai is my brother." Vegetarian dinner at 6:30. Wednesday September 27, there will be a dawn-to-dusk vigil at the Israeli Embassy, 3514 International Drive NW, as well as a lobby day at Congress. September 28, there will be a noon-hour mass rally in front of the Israeli Embassy to mark the 14th anniversary of Vanunu's kidnapping by Israeli agents in Rome after telling his story to a British newspaper. For information and childcare reservations, contact Kathy at Dorothy Day House, 202-882-9649.

* July 1 to August 9, Fellowship of Reconciliation's "People's Campaign for Nonviolence," 40 days of actions embracing a multitude of issues, including nuclear disarmament and Iraq sanctions.

* July 25, 2000 - An Indefinite Fast for Peace and Justice in Vieques begins in Vieques - in front of the main gate of Camp Garcia - and in Washington, DC, in Lafayette Park in front of the White House. Some participants in this witness in DC will carry on an open-ended, liquid-only fast (with calories) until the meeting with Clinton is granted. This fast will become a liquid-only no-calory fast if the USS Harry S Truman Carrier Group begins bombing Vieques, which the Navy has announced will take place between August and October. This fast will continue open-ended until Clinton grants the meeting to the leaders of Vieques, even after the bombing stops temporarily. All who share the commitment to stop the bombing in Vieques are invited to support this fast as called.Please contact Andres Thomas Conteris at 202-232-1999 for more information

* July 4, 2000 - "A Clown, a Hammer, a Bomb and God", a one-man play about the Plowshares Movement, in support of the Fellowship of Reconciliation's People's Campaign for Nonviolence, a 40-day series of teach-ins, protests and nonviolent civil disobedience that begins on July 1.
- 2 p.m. - Performance, along with the play "A GOOD DAY TO PIE," in Upper Senate Park (juncture of Constitution Avenue, Delaware Avenue and New Jersey Avenue, NW - Union Station metro exit)
- 6 p.m. - Performance in Lafayette Park outside the White House (McPherson Square metro exit)
- For information call 2Clown Central at 212-841-0105.

* FYI (for the young at heart): Also on July 4, 2000, "High Noon": annual Rainbow Family Gathering prayer for peace on earth (in Montana), and 4th of July Smoke-In (in Lafayette Park).

* Fast and Continuous Vigil by for Vieques, Lafayette Park, which began Wednesday, June 14, 2000, by Hector Rosario, Dartmouth Ph.D. student (mathematics). Hector ended his fast on June 20th, and left for Vieques, upon hearing that the U.S. Navy had begun firing on Vieques once again. June 14 Message Delivered to Clinton | June 16 Letter from Rep. Gutierrez to Clinton

* Millenial Anniversary Drum Council! June 3 and 4, 2000, and the First Sunday of each month, 2:00 PM, Lafayette (Peace) Park - Bring instruments, heartsongs, dance, express yourself, and celebrate the 19th anniversary of the vigil! Peace is possible!

* Japan cities should adopt Kobe Formula, since the national government has been lying for 40 years. -- message from Gensuikyo-Kobe's Sec.Gen. Kajimoto.

* May 12-16, 2000 - Shut Down the Nevada Test Site for Mother's Day! - Shundahai - Invitation from Corbin Harney. Link your website to www.shundahai.org/Momspring00.html

* DC Days May 7-10, 2000: In each of the past eleven years, Alliance for Nuclear Accountability has hosted four days of training, education, and political advocacy that bring activists from around the country to Washington, DC, to explain the concerns of their constituencies. It is an opportunity to make your voice heard at the national level and to network with people and organizations working on similar issues. ANA Washington, DC Office - 202-833-4668, kathycrandall@earthlink.net, to sign up for next year's DC Days. It's well worth the effort!

* No Nukes in Space! Seminar/Lobby Days/Tax Action, April 14-17, 2000, "Star Wars Revisited: An International conference on Preventing an Arms Race in Space" -- Four days of events to protest the resurgence of Star Wars. Included in the events: a protest at the Treasury Department to highlight the enormous waste of our tax dollars being spent on space weapons; an international organizing conference; the general membership meeting of the Global Network; and a lobby day on space issues. (See also CND's Space Info Page.)

* February 26, 2000 at 6.00 p.m. - DC Coalition to Stop the War Against Iraq commemoration and forum - ninth anniversary of the Highway of Death massacre of Iraqi troops by US forces in the Gulf war. All Souls Church, 16th and Harvard Streets, NW (entrance on Harvard Street). Metro = Cloumbia Heights. From: Marvin Wingfield

* Wednesday, February 23 at 7:00PM - STUDENT Mobilization for Global Justice
Where? University of the District of Colombia (UDC) 4200 Connecticut Ave., NW, Building 39, Room 205 (at UDC-Van Ness metro stop on red line)
Who? progressive student activists from all area universities and high schools - Important strategizing meeting for DC area students so that we can mobilize THOUSANDS of students for A16 events. Pizza and Beverages provided! Contact Melinda - Melinda@afgj.org 202-544-9355 or Smriti 202-667-9328 for questions.

* Saturday, February 19, 2000 - "Tell President Bill Clinton and Attorney General Janet Reno: ENOUGH IS ENOUGH - SEND ELIÁN HOME! Rally and march in Washington, D.C. Assemble at 11:00 am at Lamont Park (Mt. Pleasant St. at Lamont St. NW) and march to the White House. Sponsored by the National Committee for the Return of Elián to his Father in Cuba. International Action Center (202) 544-5752."

* FEBRUARY 16, 2000 - REPRESENTATIVES OF THE CIVIL DISOBEDIENCE CAMPS IN VIEQUES, PUERTO RICO -- 4:00PM Demonstration in front of the White House).

* January 22nd-23rd, 2000 - Third National Conference on Civil Disobedience, Ward Building at American University . If you want to help with the War Tax Resistance Table give Carol Moore a call 202-635-3739 ASAP

* January 11, 2000 - 5:30 p.m., Lafayette Park - Committee for the Rescue and Development of Vieques, and anyone else who, regardless of political ideology or partisan affiliation, is opposed to the US Navy's occupation of the island of Vieques, Puerto Rico.

* Friday, December 10, 1999, 7:30 p.m. Catholic Workers brought weekly meeting to Lafayette Park to hear vigilers' witness. Concepcion, Thomas, and Ellen spoke about what brought them to the White House, and what keeps them there.

* Friday, November 19, 1999, "6:00PM, in front of the White House, with drums, banners, picket signs, bull horns, etc., and demand from President Clinton once again, loud and clear, that he must order the US Navy out of Vieques now and must not allow one more bomb to be dropped or one more bullet to be fired in Vieques. Contact: Flavio Cumpiano, Committee for the Rescue and Development of Vieques, Washington, DC (202-721-4688). For more information on Vieques and updated information on events and news, please visit http://www.viequeslibre.org."

* Shut Down the School of Americas! Buses driving from DC to Fort Benning Friday-Monday, November 19-22.

* Saturday-Monday, May 1-3, 1999 - School of Americas actions in Lafayette Park and at the Pentagon (numerous people arrested). Also "Impeach Clinton" demonstrators on Saturday (they've been coming for months), stressing the China nuclear technology/spy transfers.

* Sunday, April 25, 1999: 14th Street Bridge to be Picketed by anti-bombing demonstrators while NATO dignitaries head for the airport.

* Friday, April 23, 1999: Thomas was Arrested holding the peace line in Lafayette Park while Albanians chanted "Bomb! NATO BOMB!" nearby in the park, and the Citizens Summit called for denuking NATO on the other side of the White House. NATO ministers in Washington, D.C., prompted an armed police camp during the 50th Anniversary Summit, April 23-25, 1999. Depleted Uranium Keeps On Killing and "Bill Clinton says: 'Solve differences with words, not guns' - Stop Bombing" were the messages on Thomas' confiscated signs. When Thomas retrieved the sign the next day, he added the message "Welcome to the Police State" and positioned it next to the fence for the cameras of tourists.

Police did nothing but order the victim out of the park when a nonviolent "Stop Bombing" advocate dressed up as Uncle Sam was beaten by some of the Albanian demonstrators, many of whom were wrapped in American and Kosovan Liberation Army flags. "They're lucky the flag amendment hasn't passed," Thomas says.

February 1998, once again there were vigils and drumming against war and sanctions in Iraq outside the White House. Rallies were organized through Washington Peace Center, 202-234-2000
* February 21, 1998, March against Iraq sanctions