GREAT NEWS! On October 24, 2020, the 50th member state of the United Nations ratified the Treaty on the Prohibition of Nuclear Weapons! The TPNW becomes international law on January 22, 2021!

Proposition One Campaign has been working for an end to the whole nuclear era since it was founded in 1990, to bring a voter initiative for global nuclear weapons abolition and conversion of the war machines to provide for human needs to the people of Washington DC. The concept was proven viable by the victory of DC Initiative 37 in 1993. As a result, the Nuclear Weapons Abolition and Economic and Energy Conversion Act has been introduced each session between 1994 and 2019 into the U.S. House of Representatives by DC's Congresswoman Eleanor Holmes Norton. Until 2019, this was the ONLY legislation calling for nuclear abolition and conversion, and we focused our energies on seeking co-sponsors in the House of Representatives. In 2017, the United Nations issued the Treaty on the Prohibition of Nuclear Weapons, and we launched a campaign in the Senate as well. We've created these resources for those who want to help with the campaign:

For the House -
* Please sign the online Letter to Representatives asking for co-sponsorship of Eleanor Holmes Norton's "Nuclear Weapons Abolition and Economic and Energy Conversion Act", which she plans to re-introduce in 2021 using the same language as HR-2419 in the 2019-2020 session of Congress
* And circulate the paper Petition to U.S. Representatives

For the Senate -
* Please sign the online Petition to the President and Senators for the U.S. to sign and ratify the U.N. Treaty on the Prohibition of Nuclear Weapons
* And circulate the paper Petition to Senators

Other Resources:
* "Don't Bank On The Bomb" - move the money from nuclear weapons industries and banks that fund them
* WILPF US Disarm Committee website and YouTube webinars
* Resource Guides Available for Solidarity Events
* "Let's End the Whole Nuclear Era!", a WILPF-US Disarm Committee foldover flyer
* "Warheads to Windmills: How to Pay for a Green New Deal" report by NuclearBan.US
* Speeches and reports from the 2019 Nuclear-Free-Future Tour in California and Hiroshima
* 75th Anniversary Timeline examining key events in 1945 leading to nuclear weapons and the United Nations
* Contact the Campaign

IN THE HOUSE: Ms. Norton reintroduced her bill for the 14th time on April 30, 2019 as HR-2419, and issued a press release which focuses on important revisions to the bill. We're asking you to ask your Representative to co-sponsor her bill. To make it easy, we have created a sign-on letter online, which begins: "As a constituent, I urge you to co-sponsor 'The Nuclear Weapons Abolition and Economic and Energy Conversion Act.' The bill has been introduced each session since 1994, suggesting we help lead the world step-by-step towards complete elimination of nuclear weapons. In addition the bill provides funding for environmental restoration and to transform our war industries to produce carbon-free, nuclear-free energy...." There is also a paper petition to U.S. Representatives to circulate at events and return to the address at the bottom.

This is the ONLY BILL in the U.S. Congress calling for global abolition of nuclear weapons. We were delighted that in 2019 Representative Jim McGovern introduced H.Res. 302, "Embracing the goals and provisions of the Treaty on the Prohibition of Nuclear Weapons," which is a RESOLUTION that allows legislators to express their support for the Treaty, but it doesn't make law. Norton's BILL, on the other hand, creates a law which supports the treaty, and also provides funding for conversion of the war industries to provide for environmental restoration and clean-energy conversion. This is how to fund the Green New Deal and get rid of nukes too! Co-sponsors are needed! Check the current list of co-sponsors recorded online.

The bill has consistently been submitted to the House Foreign Affairs and Armed Services Committees each session, and in 2017 and 2019 it has been submitted to the House Armed Services Subcommittee on Strategic Forces. If your Representative is on any of these committees, please ask him or her to co-sponsor the bill, and to help get it out of committee and to the floor for debate and vote!

We have been told by a House legislative aide that the Armed Services Committee only votes on one bill each year -- the National Defense Authorization Act (NDAA) -- so we should ask the members of the committee to incorporate the language of the bill into the NDAA.

IN THE SENATE: On July 7, 2017, at the United Nations, 122 nations adopted the Treaty on the Prohibition of Nuclear Weapons. At their 33rd triennial congress July 27-30, 2017, Women's International League for Peace and Freedom-US Section launched a petition to the President and the Senate asking for ratification. Please print and get signatures on the paper petition and send to the address shown, AND please sign (and encourage everyone you know on social media to sign) the online petition supporting the nuclear weapons ban treaty as well. We hope and believe this will go viral!

Let your legislators know you want them to support a world without nuclear weapons! The Congressional Switchboard is 202-224-3121. The White House comment line is 202-456-1111.

Please let us know if you have contacted your Representative or Senators so that we may follow up.

And if you are a constituent, please take time to thank Eleanor Holmes Norton for faithfully introducing her nuclear weapons abolition bill each session since 1994, and tell her you've contacted your Representative to ask for co-sponsorship! Ms. Norton's fax is 202-225-3002.

History of the Bill

The bill was first introduced in 1994 as the "Nuclear Disarmament and Economic Conversion Act", then again in 1995, 1997, and 1999, when U.S. Representative Lynn Woolsey (CA) joined Ms. Norton and several experts on nuclear disarmament issues to announce active support for the legislation, and again in 2001, 2003, and 2005 (when Representative Woolsey, plus John Lewis and Cynthia McKinney of Georgia, and Sheila Jackson-Lee of Texas, quickly signed on). In 2007 there were no co-signatories, but in 2009 John Lewis and Lynn Woolsey's aides repeatedly told us that they signed on to HR-1653, although you'd never know about it by searching Congressional bills. In 2009, Ms. Norton's announcement was timed to recognize Proposition One co-founder William Thomas, who had died on January 23rd.

During 2009 and 2010, Proposition One co-founder Ellen Thomas and a team from DC traveled 30,000 miles around the country learning about the entire nuclear chain, from uranium mines (reclaimed and not), to nuclear power and weapons plants, to radioactive storage facilities, and promoting voter initiatives everywhere. During that time they became convinced that we will never be sure of abolishing nuclear weapons until there are no longer nuclear power plants, which for sixty-plus years have been producing weapons-grade uranium and plutonium. The travelers received excellent suggestions for improving the language of the proposed bill, which up till then hadn't been getting much respect from Congress. They proposed revisions which Ms. Norton accepted in 2011.

The 2011 bill was renamed the "Nuclear Weapons Abolition and Economic and Energy Conversion Act." There were four co-sponsors for HR-1334, Representatives Steve Cohen (TN), Bob Filner (CA), Dennis Kucinich (OH), and Fortney Pete Stark (CA). Again, John Lewis and Lynn Woolsey's aides said they were signing on, but it didn't appear on the Congress website.

In 2013, Ms. Norton's said on introducing the bill, "Today, our country has a long list of urgent domestic needs that have been put on the back burner even though millions of Americans have lost their homes and jobs and sequestration has started. As the only nation that has used nuclear weapons in war, and that still possesses the largest nuclear weapons arsenal, I urge support for my bill to help the United States lead the world in redirecting funds that would otherwise go to nuclear weapons to be available for urgent domestic needs." Representative Raul Grijalva (AZ), co-chair of the House Progressive Caucus, signed on to HR-1650.

In 2015, when she introduced HR-1976, Ms. Norton wrote in her Dear Colleague letter, "Polls indicate that over 70% of Americans want 'the peace and security of a world without nuclear weapons.' We must begin to turn public sentiment into public policy, and make advances toward a peaceful, nuclear-weapons-free future." John Lewis (GA), Raul Grijalva (AZ), and Lacy Clay (MO) signed on. And in spring, 2017, during a Nuclear-Free-Future tour, we were told by Lacy Clay and Raul Grijalva aides, and by Jan Schakowsky (Chicago, IL) personally, that they would sign on to the bill when introduced in the 115th Congress.

In 2017, when Ms. Norton introduced HR-3853, her press release read: "There is no greater threat to the future of our planet than nuclear war.... As we seek to eliminate North Korea's march toward achieving long-range nuclear weapons, our nation, with the world's largest nuclear arsenal, should lead by example by bringing nations together to begin negotiations on reducing our stockpiles of warheads and moving toward realizing a world without nuclear weapons." Co-sponsors were Representatives Jan Schakowsky (IL) and Jim McGovern (MA). Lacy Clay and Raul Grijalva didn't show up on Congress.gov. 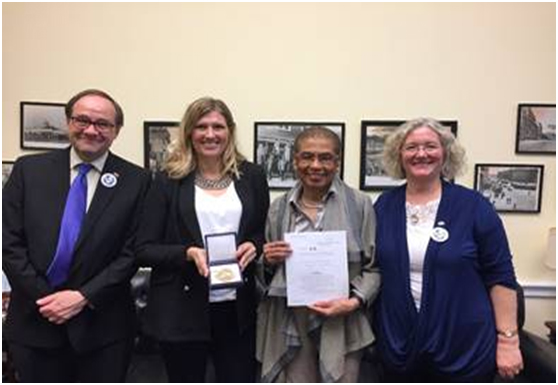 In 2019 members of Women's International League for Peace and Freedom - US Section asked Ms. Norton to revise the language of the bill by naming the UN Treaty on the Prohibition of Nuclear Weapons in the first clause, eliminating the "date by" portion of the last clause, and removing (for later introduction as a separate bill, we hope) the clause calling for an end to war and all military operations, which was getting in the way of recruiting new co-sponsors. Ms. Norton agreed to all the revisions, and was congratulated by Nobel Peace Prize winner ICAN's executive director, Beatrice Fihn, and Wallis Timmons and Vicki Elson of WILPF-US and NuclearBan.US, in this photo. On May 21, 2019, Representative Jim McGovern (MA) co-sponsored HR-2419; Ms. Norton has co-sponsored his Resolution which supports the UN Treaty on the Prohibition of Nuclear Weapons, H.Res 302. On October 11, 2019, Representative Ilhan Omar (Minneapolis, MN) became a co-sponsor of HR-2419, and on October 30, 2019, Representative Barbara Lee (Oakland, CA) signed on. Sheila Jackson-Lee (Houston, TX) co-sponsored again on January 15, 2020, as did Jan Schakowski (Chicago, IL) on January 29, 2020.

Other co-sponsors over the years, now retired, have included David Minge and James Oberstar (Minnesota), Charles Rangel (New York), Al Wynn (Maryland), and Earl Hilliard (Alabama). As each Congressional session ends, all unvoted-on legislation expires and must be re-introduced. Your help is needed in obtaining LOTS of co-sponsors in this Congress! Bipartisan support would be very helpful.

Now we have the Roots Action letter to help us!

We of the Proposition One Campaign thank Ms. Norton for her vision, courage, and patience over these many years. We hope this session the bill will have so many co-sponsors that it will finally get out of Committees and to the floor for a vote.
Proposition One Campaign was created by the White House Antinuclear Vigil, which began June 3, 1981.

This is a current project of Women's International League for Peace and Freedom, U.S. Section, Disarm/End Wars Committee.

"Oracles of Pennsylvania Avenue" by Tim Wilkerson,
first broadcast in two parts by Aljazeera in 2011,
winner of "best documentary" at Daytona Beach Film Festival in 2013.

"DC Initiative 37" video by Jai Tomlinson, produced in 1993 during and after the successful voter initiative which led to the bill introduced each session by Eleanor Holmes Norton.

"The Ground War At Home", produced in 1991 by Ellen Thomas, about the drumming 40 days and nights outside the White House during the first Gulf War.

"Radiation Blues," written by Ellen Thomas in 1986 after Chernobyl, updated and sung by Courtney Dowe in 2011 after Fukushima