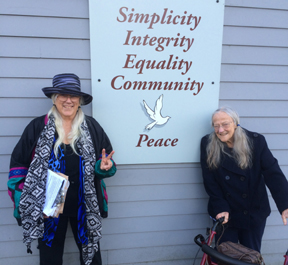 Below are links to photos and contacts from our Nuclear-Free-Future tour so far, starting on the West Coast of the US January 21 to February 21, 2016, continuing on the East Coast April 7 to May 7, 2016, to promote HR-1976 during this election year - the Nuclear Weapons Abolition and Economic and Energy Conversion Act - and to advise WILPF branches and others about international efforts to abolish nuclear weapons.

In her presentations, Carol Urner shared a number of resources, which are linked here.

Next stops: September we plan to go to DC for the World Beyond War-sponsored "No War: 2016" conference, and then we have been invited to speak in Pittsburgh, PA, Ann Arbor and Detroit, MI, Kansas City and St Louis, MO. We hope others will invite us to stop along that very large (3,000 mile) loop so we can share information among each other.

Please contact us with any questions, additions, or corrections:

Here are some links from the tour: